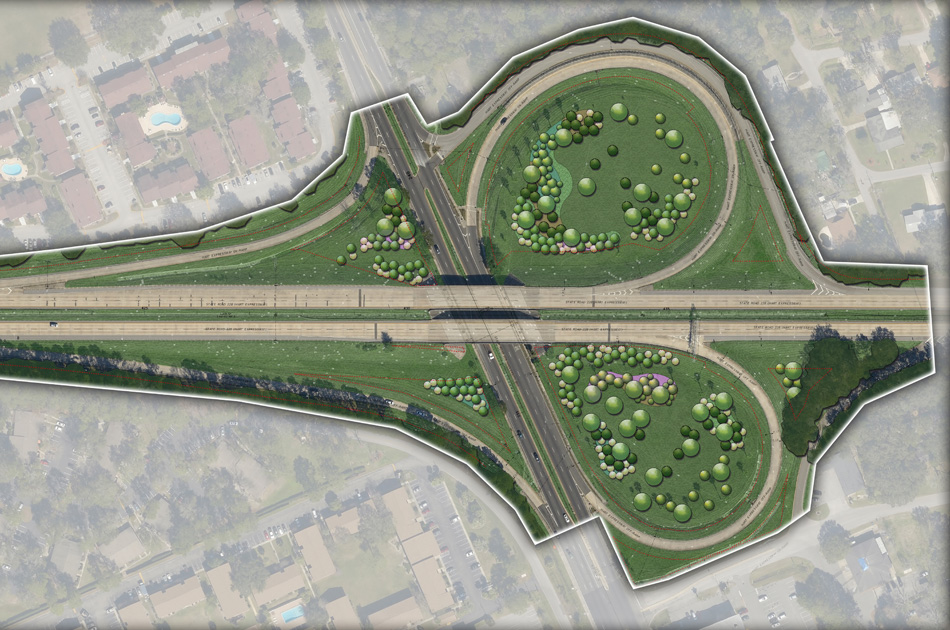 Conceptual plans for the Hart Expressway landscaping project received an overwhelmingly positive response from those who attended the Florida Department of Trans-portation’s (FDOT) July 18 public meeting at the Northeast Florida Safety Council.

Members of the project and design teams were on hand to answer questions and take feedback on the estimated $1 million project, which is focused on the Atlantic Boulevard, Alternate U.S. 1 and University Boulevard interchanges.

The landscaping plans were inspired by plants and trees that are indigenous to Northeast Florida. The naturalistic approach includes native greenery such as muhly grass, saw palmettos, crape myrtles, live oaks, bald cypress, pine, and more.

“It’s a palette that is native to this part of the state. It’s material that’s tough; it’s hearty; it’s proven in a pretty hostile environment like this,” said EJ Bolduc III, vice president of the land planning, urban design, and landscape architecture group at CHW Professional Consultants.

Currently in its 90% design phase, construction on the project is expected to start in summer 2020 and be completed by fall 2020. Irrigation and other incidental work relating to the overall aesthetics of the 1.6-mile Hart Expressway corridor will also take place.

The project was developed as a concept in conjunction with District Two’s FDOTree program, a new initiative created to educate the public about the FDOT’s Northeast Florida landscaping programs.

Michele and Chris Reichart were among the dozen meeting attendees. The couple owns a home near the Atlantic Boulevard interchange, but the project doesn’t quite extend to where they live. “I’m glad they are doing it – I think this area really needs it,” said Michele Reichart. “It looks great. I just wish they would extend it a little further.”

Groups like Greenscape and other neighbors told the project team they were pleased the design does not feature palm trees, as they do not grow naturally in the region. The public had a two-hour window to drop in, view the plans and talk with the teams.

“That’s what these public meetings are for, so people from the community can come in and be a part of it,” said Hampton Ray, community outreach manager with FDOT.

This article first appeared in the 10@10 Newsletter by the FDOT.