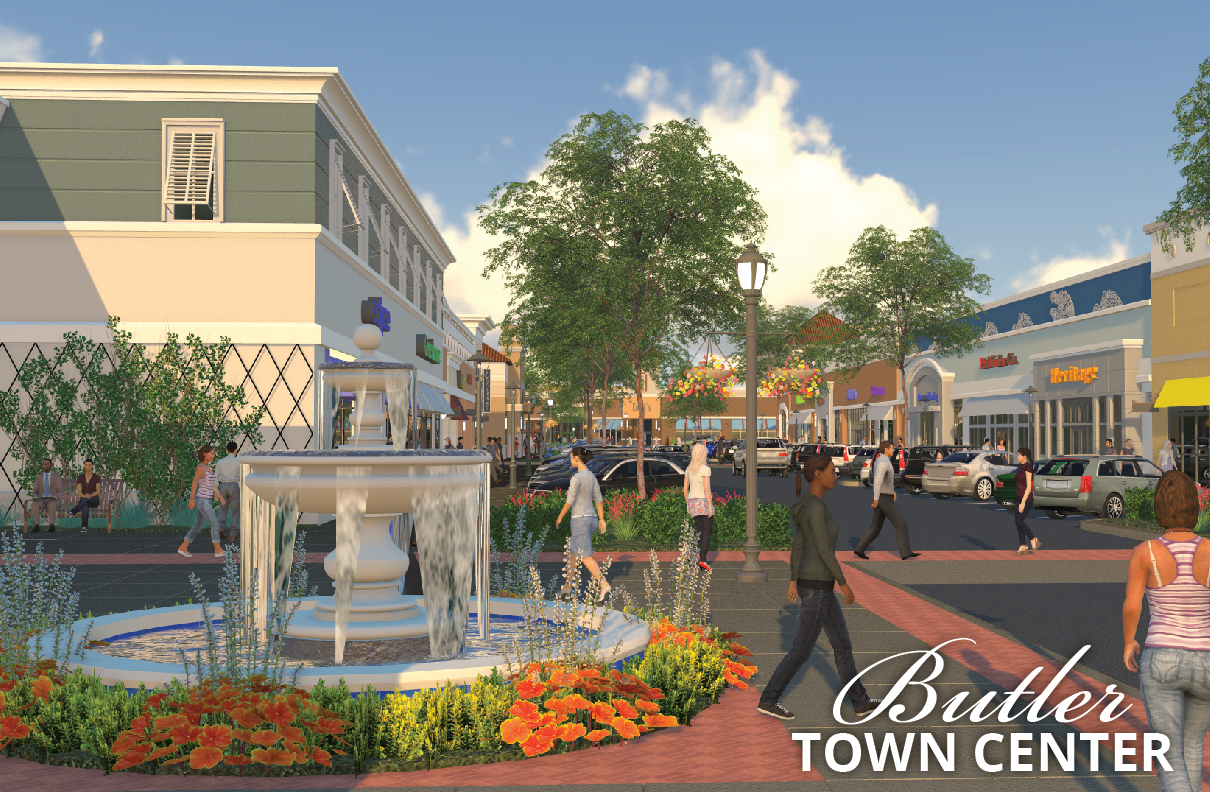 After decades as a sprawling big-box and strip center shopping area, Butler Plaza will soon get into the mixed-use business with the development of the Butler Town Center with apartments over first-floor retail and restaurants, a seven-story Hyatt hotel, and higher-end specialty shops around walkable landscaped main streets.

The town center has long been planned as part of the planned development that includes the 758,000-square-foot Butler North expansion now under construction, but more details are available since Butler Enterprises submitted a major development plan review that was approved by the city’s Development Review Board on March 22.

Butler expects to receive its development order allowing demolition and construction of the eastern part of Butler Plaza after the Gainesville City Commission approves the second and final reading of rezoning to include the current Olive Garden building in the planned development at its April 7 meeting.

Demolition will start with the former Lowe’s, which has already relocated to Butler North, in the coming weeks or months, with the demolition of the old Wal-Mart and adjacent stores once Wal-Mart moves in August to the new Supercenter now under construction, said Cory Presnick, vice president and controller for Butler Enterprises.

The company has either signed leases or is in talks with the other tenants that include Dollar Tree, GameStop, Payless ShoeSource, and Sally Beauty to go in Butler North, he said.

Presnick said he cannot comment on the Olive Garden and TGI Friday’s locations that are included within the Butler Town Center area. Although not officially announced, plans for a new Olive Garden in Butler North were submitted to the city.

Plans call for nine new buildings over a 10-block area with parking lots on the periphery.

The schedule includes the construction of six buildings within two years, including an eight-story, 144-unit apartment building with two restaurants and two retail spaces on the ground floor; a three-story, 38-unit apartment building over six retail suites; a 13-tenant building including the 29,000-square-foot 365 by Whole Foods Market organic grocery store, and three other retail buildings with one, five and nine tenants.

The 365 by Whole Foods is scheduled to open in fall 2017 with the Butler Town Center shooting for a spring 2018 opening, Presnick said.

Three other buildings will house one, five, and nine tenants.

A seven-story, 253-unit Hyatt Place and Hyatt House hotel is scheduled to open within four years and will be along Windmeadows Boulevard along with the eight-story apartment building.

A six-level, 680-space parking garage will connect to the apartment building at the second floor, for residential and commercial tenant parking.

The plans submitted to the city give only a few hints about likely tenants, with maps showing spaces for a Nordstrom Rack, Grub Burger Bar, and a Jared jewelry store, with other spaces given generic labels such as lifestyle restaurant, Asian, “sushi local” — 10 restaurants in all — shoes, books, spas, active casual, junior fashion, sport, bakery cafe, cosmetics, gifts, cards, “mens & womens trad,” sunglasses and retail.

Presnick said he can’t name tenants beyond the previously announced 365 by Whole Foods, but said the tenants will fall into the “polished casual” category with a little more upscale tenants common in larger metro areas, giving the redesigned Outback Steakhouse as an example.

A food hall with small stalls and a common seating area is in early planning stages for the eight-story apartment building.

Presnick said that is envisioned as a more affordable option for local restaurants.

The 2,400-seat Regal Cinema location will remain, but will be renovated as a 1,200-seat luxury theater under a separate building permit that will be submitted later, project engineer Robert Walpole of CHW said at the Development Review Board meeting.

A row of businesses along Southwest 35th Boulevard from the Bonefish Grill to the Tax Collector will remain but will be renovated, Walpole said.

The development does not include the CVS and BBVA Compass Bank on Southwest 34th Street, the Taco Bell, and Chuy’s restaurants, the strip across from Taco Bell that includes Tijuana Flats and Mattress Firm, the new strip that includes BurgerFi and Starbucks, or the Chili’s outparcel.

The urban design includes different decorative finishes, roof elements, and heights to give the appearance of separate buildings for retailers within a building, wide sidewalks, raised brick-paved crosswalks, public plazas, and fountains, outdoor seating for restaurants, on-street parking, and a pedestrian walk between the theater and two retail buildings.

“It’s definitely a lifestyle center with a mix of uses. Walkability was important,” Presnick said. “We’re really looking for this to be the living room of Gainesville so to speak and have folks come and spend a good amount of time whether they’re shopping or going to a good restaurant, going to a movie. We really want it to be an experience.”

The Development Review Board approval included a waiver to parking space requirements. With 680 spaces in the garage and 1,116 spaces in lots, the plan came up 48 spaces short based on the total square feet. Butler Enterprises argued that peak parking demand for retail comes when there is less demand from apartments and the hotel.

The removal of 24 heritage live oaks, mostly along Windmeadows Boulevard, will be replaced with nearly 400 new trees.

The uncurbed medians will be removed from Windmeadows Boulevard and center left-turn lanes added.