Skip to content
CHW works behind the scenes
November 24, 2014 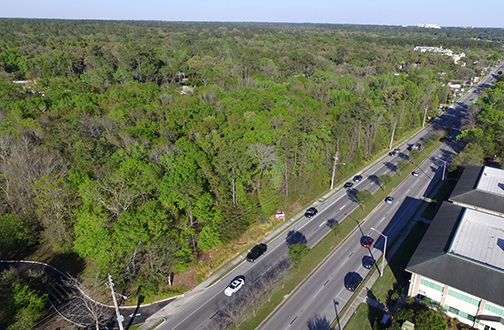 Before Butler Plaza could start its current expansion project, before the Alachua County Criminal Courthouse was built, before the first house was built in the Arbor Greens or Longleaf subdivisions, the civil engineering firm CHW surveyed the land, designed roads and utilities, and secured all the necessary permits from local and state agencies.

“We do everything but the building,” said CEO Rory Causseaux, who co-founded CHW in 1988.

In addition to the aforementioned projects, CHW has had a hand in some of the most visible developments in the area, including the SantaFe Health Park on Northwest 39th Avenue, Gatorland Toyota, and several buildings on the University of Florida campus, including the McKnight Brain Center, the Bob Graham Center, the law library, and the upcoming neuroscience and cardiology building.

While CHW primarily works in North Central Florida, some clients have used them statewide, including UF’s Institute of Food and Agricultural Sciences with extension offices and other facilities around the state.

That gives Causseaux a perspective on the oft-heard complaint about the local regulatory environment. He said only Leon County compares to Alachua County and Gainesville when it comes to strict regulations on issues such as tree mitigation, land set-asides and parking standards.

Causseaux said engineering suits him because he has been obsessive and analytical from an early age.

“I prefer things to be fact rather than fiction.”

Starting in the seventh grade, he worked for his father’s excavation business in Tallahassee every summer and after school.

“I don’t mind working hard, but I wanted to work smart rather than in a labor field,” he said. “I’m tired of picking up roots and getting grease on my hands at 6 a.m.”

The smart side of his father’s business was the civil engineering work that went into it, so he went to UF, the first in his family to go to college.

While at UF, he went to work for engineering firm Chance, Eng & Denman in 1983, “for the primary purpose of asking my wife to marry me, so I needed to give her a ring.”

He graduated in 1984 during a morning ceremony and got married that evening to a Gainesville native, Terri Coburn.

He said his career advanced faster than those of his peers thanks to mentors such as Ralph Eng and Leonard Nadeau.

In 1988, surveyor Wayne Chance left the company and asked him to go into business with him. The new company was founded as Chance and Causseaux. Chance retired after 10 years and Donnie Ellington, who graduated from UF on the same day, left CH2M Hill to form Causseaux and Ellington. Ellington retired in 2007 and Robert Walpole and Kevin Hewett, employees since 1997, bought his interest to form Causseaux, Hewett & Walpole. In recent years, the firm simply goes by CHW.

Causseaux said the firm grew slowly at the start and then grew 10 to 15 percent a year starting in the late 1990s before reaching just under 60 employees in 2007. Development work slowed with the recession and the firm was down to 30 employees in 2009, but has been recovering since. This year, CHW has added 17 employees and is up to 55.

“This has been a rebound year. The local economy has a lot to do with it,” Causseaux said.

He said he gets his satisfaction from seeing a finished product.

He recently had a celebratory photo taken of him in Oakmont when home slabs were poured nearly a decade after work on the project began.

“We built the subdivision, designed, permitted, so people could live there. That’s the finished product I’m excited about, not the roads.”

Copyright © 2014 Gainesville.com — All rights reserved. Restricted use only.